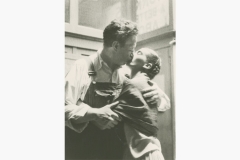 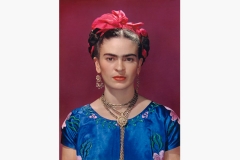 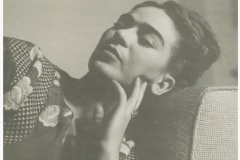 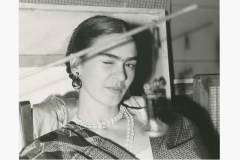 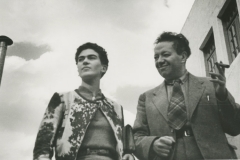 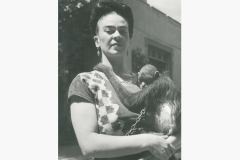 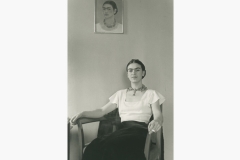 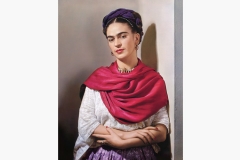 Dr. Salomon Grimberg, a leading expert on the life and work of Frida Kahlo, wrote a catalog essay for the Mirror Mirror exhibition, which originated at Throckmorton FineArt in New York City last year. Grimberg said, “Frida Kahlo’s father wasa photographer, and as a girl, she saw her looks in his photographs ofher before she discovered mirrors, which became the inseparable companions thatprovided her with a sense of self.”

“As much, if not more than any movie star in Mexico, Kahlo was photographed and her photos nurtured the limelight around her. During her first trip to the United States, she was photographed by Lucien Bloch, Imogene Cunningham, Peter Juley, Martin Munkacsi, Nickolas Muray, Carl van Vechten, and Edward Weston. In Mexico, she posed for Lola Alvarez Bravo, Miguel Alvarez Bravo, Miguel Covarrubias, Gisele Freund, Hector Garcia, Antonio Kahlo, and BereniceKolko, among others. Andre Breton and Dora Maar also photographed her. Lola Alvarez Bravo claimed Kahlo was sought after by photographers because of her aesthetic allure. Today, those same photographs, which drew the public with her magic, continue seducing others. Kahlo and her exotic beautyis part of the universal conscious. There is the right photograph for the right Frida adorateur.”

Bentley Gallery Director John Reyes says, “Frida Kahlo was a revolutionary artist born amidst political chaos in her homeland of Mexico. She was always her own favorite model, which was not about preserving youthful beauty so much as identifying herself with Mexico. Frida Kahlo embodied alegría, – a lust for life. The photographs we have chosen to featurein the exhibition capture Kahlo’s essence.”

Among the photographers whose images of Frida Kahlo are featured in the exhibition, those by German-born Gisele Freund (1908-2000) were taken during a two-year period beginning in 1950 when Freund was immersed in Mexican culture and spent a good deal of time at Kahlo and Diego Rivera’s home. Freund won many honors including the French Chevalier de la Legiond’honneur in 1983. Her powerful images of Kahlo are a testament to Kahlo’sstrength and endurance during trying times and are among the last before her death in 1954 at age 47.

We are moving, appointments are now at