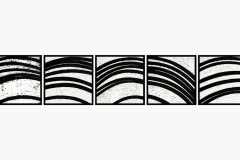 Richard Serra began making prints in 1972. Since then, he has continued to investigate printmaking and has produced an innovative body of work that is as large as it is varied.  While Serra’s prints explore the perceptual possibilities suggested by his sculptural work, they are not merely illustrative, but rather autonomous works of art that constantly push the medium to its limits. Conveying a sense of weight, instability, and potential motion, Serra’s graphic works possess a physical presence that provokes reactions similar to those experienced in the presence of his sculptures.