Bentley Gallery has a long history of exhibiting exquisite ceramic sculpture, both small and large scale. For centuries clay had been associated with the refinements of craft, but it was rarely regarded as worthy of a finished sculpture in its own right. Ceramics have had a boon in recent years, and is now firmly in an art context. Artists working in the ceramic medium investigate functional shapes and themes, with the role of clay as an artistic and sculptural medium. Though this art form originated in ancient times, artists are still drawn to the clay for for its delicate yet versatile qualities.

Stephanie Blake manipulates porcelain clay to form elegant, seemingly undulating, minimalist sculptures. Twisting and turning, her graceful abstractions have the deceptive appearance of weightlessness, grounding themselves through components of negative space and solid architectural structure. Her ceramic sculptures push and pull, expand and contract; creating a tension that represents the tension present in the conscious mind and in the human body.

Jonathan Cross develops ceramic works of art from a place where his interests in geology and architecture intersect, resulting in abstract sculptural forms. Mass, line, form and surface are used to alter the viewer’s perception of the work from various vantages.

Many Arizonans are familiar with Jun Kaneko’s large-scale ceramic dango sculptures (Japanese for dumpling) at Sky Harbor Airport in Tempe, and his ceramic tile wall in front of Phoenix Art Museum. The sculptures are made with large amounts of clay, slowly built by hand using the slab technique.

James Marshall’s ceramic sculptures are informed by time spent in Guatemala while he served in the Peace Corps. As he lived among the Mayan Quiche tribe, he developed an interest in their employment of color not only for visual stimulus, but also as spiritual conduit. Handmade processes, such as weaving fabrics, proved to be as much about the activity as the outcome—experiential and meditative. Not unlike Marshall’s ceramics, the resulting pieces presented eye-catching, beautiful lines and patterns full of energy and intention.

Bobby Silverman’s glazed large-scale porcelain tiles start out in China as raw clay. There he designed a large, paper-thin flat tile, a technical achievement in ceramics. The porcelain “blank” is fabricated in China, fired to high temperature, crated and shipped to his studio in the United States. Silverman then glazes the porcelain and fires it numerous times in his kiln to create pure color field, vivid striping, and abstract text. 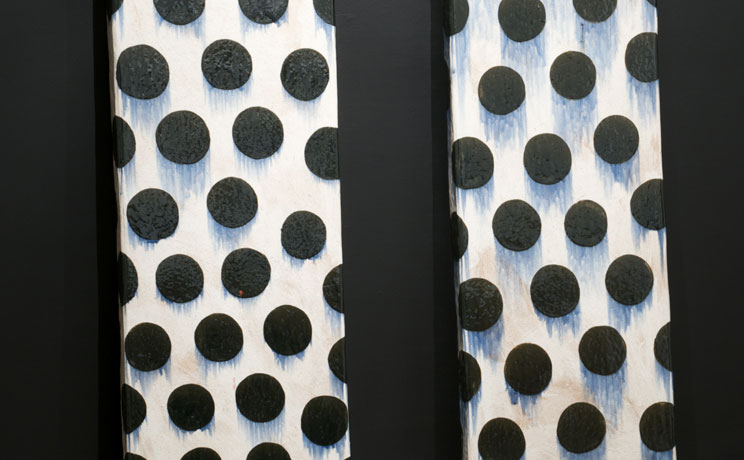