This rare sculpture represents a Buddhist bodhisattva, an enlightened and compassionate being that is an important element of Buddhism. Considered followers of the supreme Buddha, bodhisattvas are those who have achieved enlightenment and raised themselves above worldly suffering. Their main task is to help Buddha spread his belief, helping ordinary people out of their own suffering by releasing them from their attachment to worldly things.

The word bodhisattva originally comes from Sanskrit. In the beginning, Siddhartha Gotama, the original Buddha, used it to indicate the various incarnations of his life – from the past through the present. Subsequently, Buddhist theory evolved such that anyone could potentially obtain enlightenment, and the word bodhisattva came to signify those who truly devote their lives to Buddhism.

Bodhisattvas are distinguished from Buddha’s in that they are heavily adorned. A bodhisattva has chosen not to pursue nirvana, but to remain with ties to the earthly realm, and secure enlightenment, or release, from Samsara, which is the cycle of rebirth for all sentient beings. Bodhisattvas, as beings of compassion, are shown to have worldly ties through their princely garb, where conversely, the iconography of a Buddha is shown in a monk’s garb, having relinquished all ties to the earth and material things.

Ancient Chinese often carved statues from stone or metal. They would find a big block of material or carve into a mountain or cave to carve the statue. Most popular carvings would be statues of Chinese gods, especially Buddha. There are many Buddha’s in Chinese historical art. This particular, seated bodhisattva on a lotus throne, made from marble, was carved during the Eastern Wei Period from the Northern Qi Dynasty in China. Calm, stately, and full-bodied, the bodhisattva is seated in a frontal, meditative pose; his gracefully held hands, raised midair, make a gesture of assurance.[/toggle][/accordian] 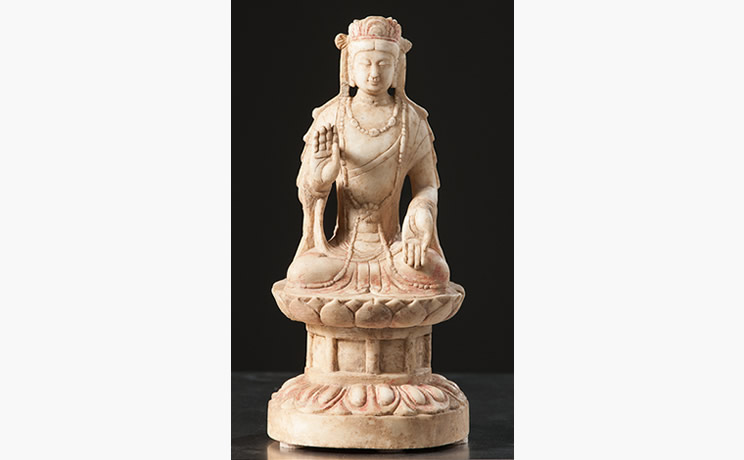