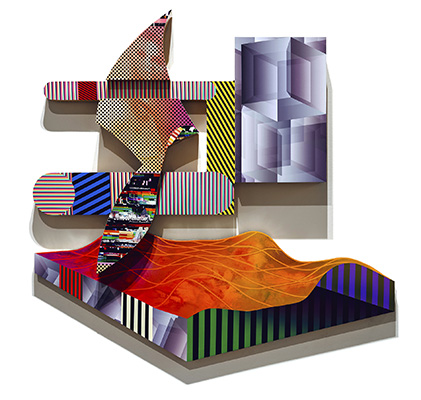 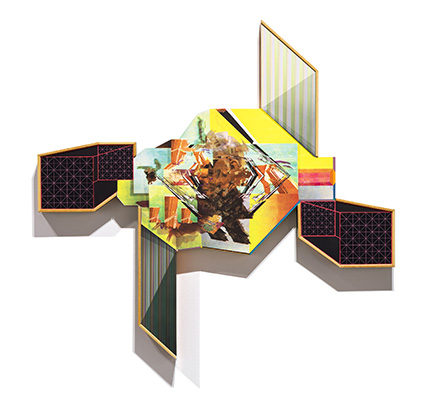 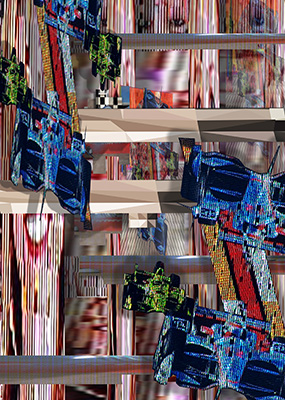 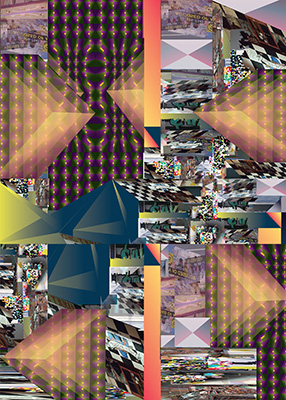 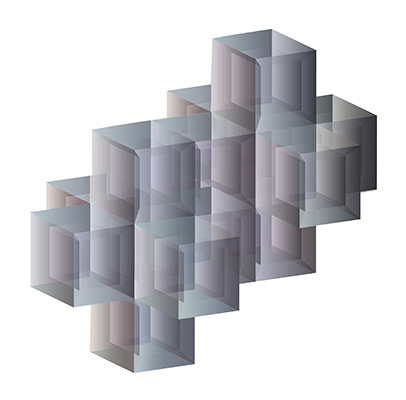 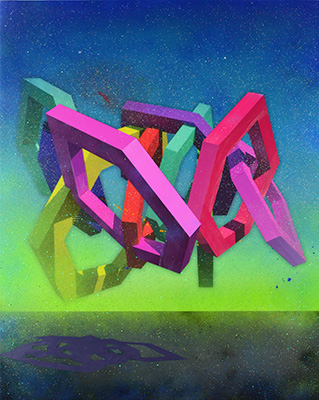 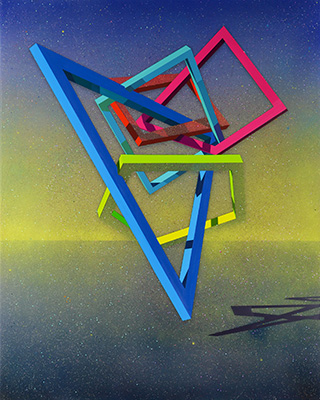 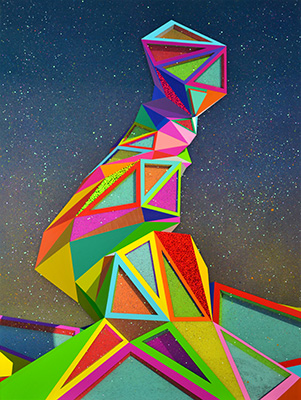 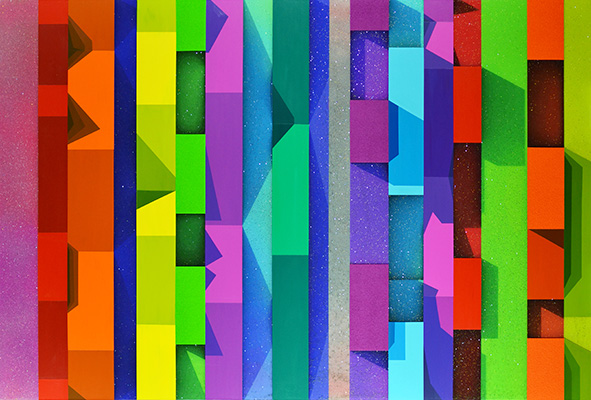 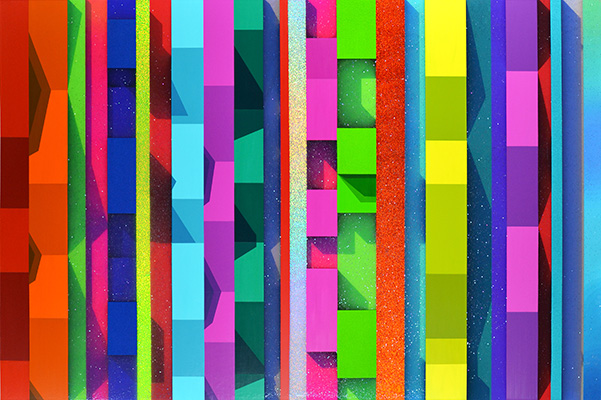 Bentley Gallery is pleased to announce Digital Process, a two-person show featuring new works by Mike Jacobs and Travis Rice. These two artists highlight the shift occurring in art making today through the use of cutting-edge technology. They explore our post-digital world where instead of exclusively working with paint and canvas they integrate bytes and pixels. Both artists use digital tools to create exquisitely crafted works of art that cut through the visual noise of our everyday.

Travis Rice’s work is influenced by his background in architecture and incorporates 3D modeling to create complex hard edge compositions that give an illusion of space through both form and materiality. This initial digital process allows forms to rupture, fracture, glitch, and pixilate, but the analog translation is meant to always bring the work back to being a primitive human process. Wandering between painting, drawing, and sculpture, Rice investigates various motifs inspired by the southwestern landscape; the butte, the mesa, and the plateau, incorporating media that test codes of taste through finish, color and application. His interests lie in creating a language of image making that speaks to our current digital era, but roots itself in a historical context through analog translation.

IN THE PROJECT ROOM: Jimi Gleason

A sample of works on show: 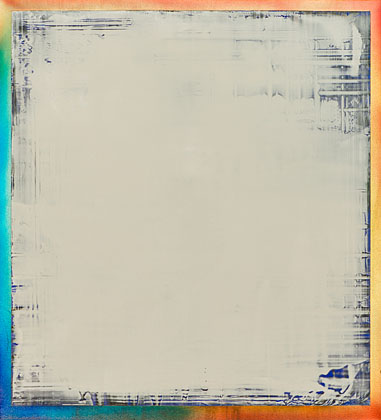 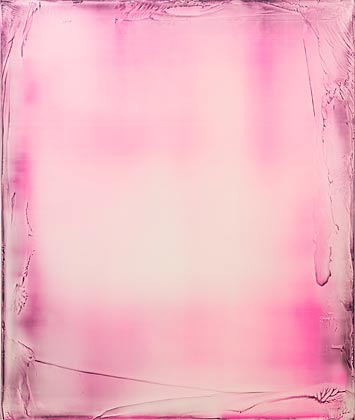 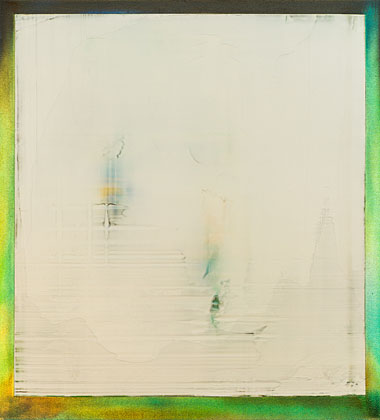 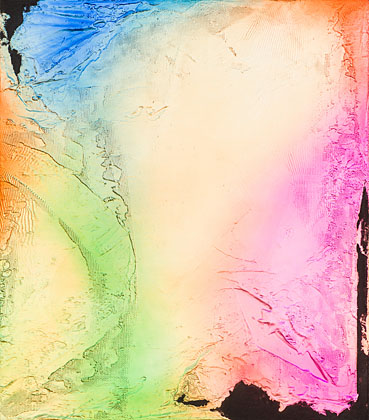 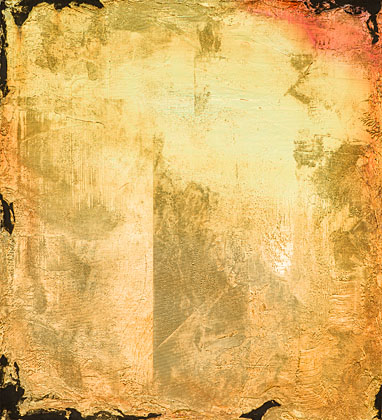 Jimi Gleason’s painting’s surfaces have always responded to both the light and space of the environment they are in.  Working with shimmery pearlescent paint, he carefully builds up layers that shift subtly.  Many of his works feature densely worked edges framing largely vacant centers, to keep the focus firmly on the quality of the color and light and on the viewer’s own perception of them.  While his works seem to derive from color field painting or contemporary abstraction, Gleason’s inspiration for his approach came from photography.  “Being a painter in SoHo, in the late ‘80s, I kept seeing these Cibachrome prints, big shiny photos.  I wanted to bring some of that back into painting, to steal it back,” Gleason said.  He was especially intrigued by the texture of Polaroid snapshots.  “What I liked about the Polaroids was the edges, the way the emulsion got squishy, that melted quality.  That’s a big part of where hey began, where the edges came into play.”  The reflective property of the material play with color and light according to the work’s surroundings and the viewer’s perspective; nuances of texture, color, and tone emerge and shift through that interaction.

Receive the lastest artist and exhibition news from Bentley Gallery.